What's Happening? is the title and lead single of B1A4's fourth Korean EP, What's Happening?. The single was simultaneously released with the EP on May 6, 2013 under WM Entertainment.

Jinyoung composed the song and co-wrote the lyrics with Baro.

The track kicks off with an angelic layering of harmonies before moving into the high-energy, guitar-driven verses. The track seamlessly moves through the different sections including aggressive rap parts and the shout-a-long One Direction-esque chorus. Though, the track has the unfortunate inclusion of a quick, talk section after the intro, first chorus and at the very end of the track that throws a wrench into its flow.[1]

As stated by Jinyoung:

Additionally, Jinyoung states that the lyrics were inspired by events of cheating that happened personally by him:

The Korean music video was released a day after the EP and single was released and televised music show promotions began two days later on May 7, 2013 beginning with M!Countdown.[4]

On May 14, 2013 the official Youtube channel uploaded a dance practice version of the song.

The Japanese single version of What's Happening was released on August 28, 2013 and ranked first on the Oricon Daily Singles Chart selling 25,705 copies.[5]

The accompanying music video incorporates all the right elements too. The boys look snazzy in a colorful, preppy-inspired concept that is reminiscent of SHINee's recent "Dream Girl" look, but served with a healthy helping of hip-hop. Plus, the boys look like they're having genuine fun (as 1D always do) sneaking around a technicolor doll house trying to save a masked-faced girl from a mask-faced man. It all leads to a humongous pillow fight with the highlight of the video in the outro as the group acts out the choreography based around the lyrics; like when they sing "Every time I think about you" and point to their watch and head. A super-fun way to end the video and leaves a positive impression on the viewer. [6]

Japanese lyrics to "What's Going On? Why?" were written by B&C Factory. 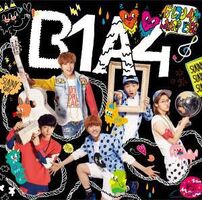 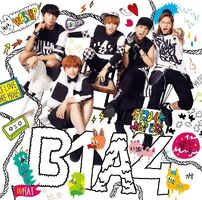 Retrieved from "https://betheoneallforone.fandom.com/wiki/What%27s_Happening%3F_(Song)?oldid=5085"
Community content is available under CC-BY-SA unless otherwise noted.